Following Coronation Street’s success at the British Soap Awards for its cutting edge domestic abuse storyline involving the character Tyrone Dobbs as a male victim, UK charity The ManKind Initiative, believes the storyline has made a difference to hundreds of thousands of men who suffer in silence behind their front door.

The charity experienced treble the number of calls to its national helpline when the episodes featured the domestic abuse storyline (including from mothers and sisters wanting help for their son or brother). One caller1 remarked that after seeing the storyline with his abusive partner, he wrote the number of the charity’s helpline number down, called and has now escaped from the relationship he was in.

The charity also believes the storyline has given more confidence to the 500,0002 men who suffer from partner abuse each year to get help and also realise they are not alone in suffering in this way. The storyline will also have opened the eyes of the public that domestic abuse also happens to men as well as women. 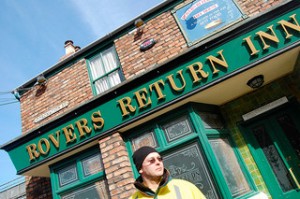 Mark Brooks, Chairman of the ManKind Initiative, said, “Coronation Street, Alan and Natalie deserve all the plaudits for such an accurate portrayal of the domestic abuse men can face behind their front doors.

“The storyline has changed the lives of so many men in giving them the confidence to get help and opening the eyes of the public that men are also victims of this terrible crime. As a charity working in this field, we cannot thank them enough.”

At the British Soap Awards 2013, the domestic abuse storyline won actor Alan Halsall, the best actor award, Natalie Gumede, the most dramatic performance award and villain of the year, and Coronation Street itself for the best storyline.

The issue of how we improve the help given to male victims of domestic violence is sure to be a topic at this year’s conference.

Make sure you are part of this year’s event by booking your ticket today.